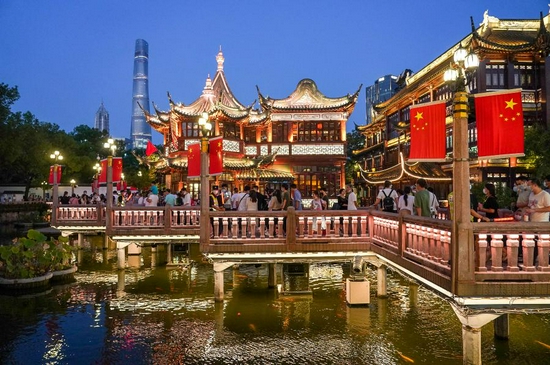 BEIJING, Oct. 10 (Xinhua) -- For some of the biggest names on Wall Street, China's economic prospects "look rosier than ever," and China is "too big to ignore," The New York Times reported recently.

Indeed, to fully understand and correctly predict China's economy has always been a topic the world pays great attention to.

Over the course of China's economic take-off in recent decades, noises forecasting a collapse of China have hardly been absent. However, the Chinese economy continues to grow and improve, and its development achievements have been indisputably remarkable. Those who often spoke ill of the Chinese market were frequently slapped by reality.

Facts speak louder than words. China has its own way of developing its economy and has amassed valuable experience over the years. If Western economic and political communities still attempt to read the Chinese economy without thinking outside the old box, or give up their prejudices, China's economy will continue to be a myth for them.

To grow its economy effectively, China has been able to keep consistency and adapt to changes.

While the world is undergoing transformations rarely seen in a century and wrestling with the COVID-19 pandemic at the same time, China has not only maintained its macro-economic policies steady, but also geared up to build a new development pattern and promote high-quality development.

As a result, China was the world's only major economy that registered a positive growth last year, and its economy expanded at 12.7 percent in the first half of this year. Those achievements have demonstrated the strong resilience of the Chinese economy and injected both confidence and impetus into the global economic recovery.

Moreover, China has been willing to use policy tools to push forward reforms, stimulate innovation and energize new development momentum.

China has continuously improved its scientific and technological innovation capability, optimized government services and stabilized the industrial supply chains so that the real economy can be better served.

"China focuses on doing its own work. This is not only a right choice, but also the source of strength for China to continue to resist pressure," an opinion-piece published by the Singapore-based Lianhe Zaobao commented earlier this year.

In this highly inter-connected world, China believes playing the "zero-sum game" is not in the fundamental interests of the global community. Beijing has all along been firmly dedicated to opening-up and cooperation, and has always been trying to promote its own development by boosting the world's common development.

Despite that the economic globalization has been under fire, China, with even stronger commitment to opening-up, has continued to join others around the world to build an open global economy.

More importantly, the Belt and Road Initiative has been increasingly viewed around the world as a path to prosperity, innovation, health and green development.

Across the world today, there are more and more people who have begun to deeply recognize that China's vigorous economic development is of positive significance to the global economy, and it is unpopular to play up the "decoupling" and "China threat" theories.

And as long as those in the West who are still obsessed with a bearish take on the future of the Chinese economy base on their old thinking and deep-seated ideological prejudice, they will be proved wrong over and over again. Enditem

Arana netted his first league goal of the season, finishing off a move involving Hulk and Diego Costa with a low finish from eight yards.。

The result leaves Atletico, who are aiming for their first Serie A title in 40 years, with 65 points from 30 matches, 10 points clear of second-placed Palmeiras.。

"We had to show a lot of patience by continuing to run with the ball and sticking to our strategy," Atletico manager Cuca told reporters after the match.。

"We worked the opponent out after halftime and started to create more opportunities. We moved the ball well from by switching play and that's how we got our goal in the end."